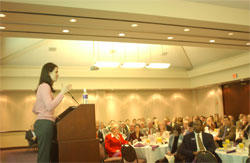 A gathering of professionals exchanged business philosophies, jokes and laughter Tuesday morning at the latest installment of the Charles Tandy Executive Speaker Series breakfast.Michelle Peluso, Travelocity president and CEO, talked about how her former company, Site59, went from being on the upswing in the business world, to almost crashing after the attacks of 9/11, to being bought by Travelocity. She then worked her way up to become the company’s top executive.

Peluso arrived at the 59th minute and told the audience of mostly local businessmen and women, to feel free to boo when she mentions the name of one of her competitors, Expedia, and the audience did as she said.

She said although you can purchase cheap tickets from both Expedia and Travelocity, her company goes the extra mile to ensure customer satisfaction.

Peluso said Travelocity’s employees talk to the locals to get their input about what places to see and things to do while travelers are visiting. She added that if a customer is not happy with any part of his or her experience, they are more than welcome to call the company, and Travelocity will figure out a solution.

“We will never take for granted the hard-earned dollars our customers spend with us,” Peluso said.

Travelocity will turn 10 years old in March and earned $7.4 billion in 2005. Peluso said it wouldn’t have happened without teamwork.

“Foremost, I learned in 12 years that my most important responsibility and most important job is to put other people first,” Peluso said. “It is really as simple as believing in your team and success will come once that happens.”

Peluso described how it takes courage and passion for the job to own up to mistake, and she said she recognizes those who come forward in the weekly e-mail sent out to the entire company.

Peluso said she also stays in the corporate loop is by having brown bag lunches with employees who she does not see on a daily basis.

Although there weren’t many students who attended the speech, the few who did said they learned from it.

Marcia Hensley, an MBA graduate student, said: “I have heard Michelle Peluso on (National Public Radio) and really appreciated her business philosophy, leadership and as a woman.”

“I am interested in Travelocity as a company and figured it would be interesting to hear the CEO talk about the company and the future on how things are going,” Tate said.

Peluso didn’t leave without giving students some guidance, which was to get everything they can from not only the university, but also the community around it.

“My advice is to simply don’t live on the sidelines,” Peluso said.