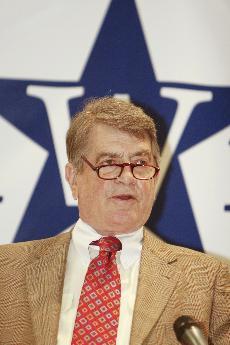 Everything depicted in the movie was true.

Charlie Wilson, portrayed in the Oscar-nominated movie “Charlie Wilson’s War,” spoke at the Jim Wright Symposium Wednesday. He said about his portrayal in the film, “I tell you, first of all, we’ll stick to it that I’m guilty of everything in the movie.”

Greeted with a standing ovation by faculty, staff, students and guests, Wilson, who Jim Wright, political science professor at TCU and former U.S. Speaker of the House, introduced as “a true Texas legend,” was honored at the annual Wright Symposium.

Famous for his involvement in the CIA’s most expensive covert operation, the former Texas congressman went under the radar to support the Afghan freedom fighters during the Cold War.

Jim Scott, a political science professor at Oklahoma State University who spoke at the symposium, said, “Wilson found the levers … and pulled those levers to get what he needed.”

Wilson placed himself in a subcommittee in which he was able to gather funds that no one knew existed in the midst of the Cold War.

“Back then, you simply did not get $20 million that was not requested, not authorized and had never been heard of,” Wilson said.

Many thought the war would only last a few weeks, Wilson said, but Christmas Eve 1979 and the Soviet Union’s invasion of Afghanistan changed everything.

Wilson visited with Afghan warriors and refugees in Afghanistan to fully understand the situation and realized he needed to interfere.

“The Soviets had a serious problem,” Wilson said. “I also realized that with our help for the Afghans, the Soviets will have a monumental problem.”

By February 1989, Wilson collected enough funds for Afghanistan to take down Soviet helicopters.

“The ferocious Red Army, with its tail between its legs, ignominiously marched back to the Soviet Union,” Wilson said.

Wilson referred to the Soviet Army’s defeat as “one of the most miraculous military victories in history.”