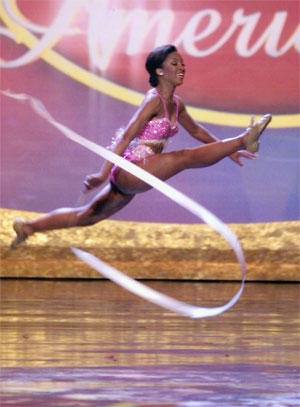 Meet Marshawn Evans: a Miss America finalist, a litigator with a passion for the courtroom, a contestant on Donald Trump’s “The Apprentice,” “One of America’s Top Ten College Women” as named by Glamour magazine and – of course – always a Horned Frog at heart.This 26-year-old woman has led a life full of accomplishments, and shown a true passion to change the world.

Her mottwo, she says, is: “Successful people are those who see past today and dream of a greater tomorrow.”

Marshawn graduated from TCU in 2001 with a degree in political science and attended law school at Georgetown University in Washington. She now works at a law firm in Atlanta.

Mary Evans, Marshawn’s mother, said she knew her child was truly gifted when she was only 3 years old.

“She could talk and walk at a very early age,” Mary said. “It was amazing the way she went on and on talking all the time; she could really tell you what she wanted and believe me she did!”

Mary said she could see the competitive edge and drive in her daughter early on, and knew she would accomplish many goals in her lifetime.

“I remember when Marshawn was in elementary school; I had to have many teacher conferences about her problem with talking in class,” Mary said. “She always had something to say; she is very outspoken and this was evident at a very early age.”

Marshawn said she learned to channel her passion for communication into a lifelong career.

“My parents knew that I had a gift and wanted to make sure I wasn’t scolded for it, but rewarded,” Marshawn said. “I now own a successful public speaking consulting company and am a litigator at a top law firm in Atlanta because of their support.”

At an early age, Marshawn stumbled across the baton. Instantly, it became attached to her hand, as she had a natural love for performing.

“I remember taking a picture of her and some friends at school and she was on the end, just slowly twirling this baton,” Mary said. “It wasn’t long after that when we had her enrolled in dance, gymnastics and private baton lessons.”

As all was going well, Marshawn encountered difficulties. Many of her fellow young twirlers told her African-American girls aren’t supposed to be twirlers, and doctors diagnosed her legally blind in the right eye with a birth defect called a Coloboma. A Coloboma is a gap in part of the structure of the eye that affects one’s vision.

“The doctors told us that baton twirling was out of the question,” Mary said. “Her disability didn’t slow her down one bit though; she worked harder than ever.”

Shrugging aside the disability and the critics along the way, Marshawn went on to win many national baton titles and placed fourth runner-up in the Miss Majorette of America competition. Marshawn was TCU’s one and only twirler from 1997 through 2001.

Marshawn has accomplished much in her 26 years and said she knows everything she has been blessed with could not be possible without the support of her family.

“I owe so much to them,” she said. “They are my biggest inspiration. I get my drive and determination from my father and balance and compassion from my mother. She has the insight and intuition that inspires me to be a better person.”

Marshawn said her younger brother, who was a quarterback for Rice University, has also been a great support along the way.

“He is my best friend and has taught me about courage and how to face adversity,” Marshawn said. “I am very fortunate to have them all supporting me in everything I accomplish.”

Doors of Opportunity Along the Way

Not only is Marshawn skilled with the baton, but she is also a motivational voice to many young people across the nation.

When she was only 17, she started America CAN! (America’s Children Achieving Now), a motivational youth program designed for young people across the nation to help them avoid juvenile crime.

When Marshawn was 19 and a student at TCU, she was appointed by then-Governor George W. Bush to the Juvenile Justice Advisory Board. She currently continues to serve on this board at the state and national levels.

“I am passionate about working with kids and helping them make sound decisions,” Marshawn said.

Soon after she graduated from TCU, Marshawn started a second company called Communication Counts! The company, whose motto is “Speak with Excellence Every Time,” is a professional development and public speaking consulting program.

Communication Counts! also hosts seminars and workshops at conferences for various companies across the country.

Marshawn said one of her biggest accomplishments while at TCU was being named a Harry S Truman Scholar. The $30,000 scholarship is given to 75 college students nationwide who are seeking careers in the government or public service areas.

“TCU and the faculty are great about encouraging and cheering their students on along the way,” Marshawn said. “I had no idea about this scholarship and my professor/mentor, Donald Jackson, walked me through the entire rigorous process and helped me set up mock interviews.”

Jackson, a political science professor, said Marshawn was most deserving of the scholarship.

“The Truman is highly competitive at the national level and is only given to truly amazing students,” Jackson said. “With her passion for working with high school students in anti-delinquency programs combined with great motivational speaking skills, I knew she would be a great candidate.”

Jackson also worked with Marshawn in the Washington Internship Program, where she was assigned to the criminal justice system.

“She showed intelligence and an eager work ethic while in school, and now with her recent graduation from Georgetown, a top national law school, she has an amazing future ahead of her,” Jackson said.

For those who believe beauty and brains don’t go hand in hand, Marshawn is living proof that they do.

Marshawn swept the preliminary rounds by winning in two categories she had unquestionably perfected – interviewing and talent (where, of course, she won with baton twirling).

As Miss D.C., she promoted her platform United Against Crime: Investing in Youth for a Safer Future. Marshawn also worked closely with her company, America CAN!, during her reigning year of service.

Marshawn said being in pageants and modeling helped her to attain her motivation and hopeful attitude to the world.

“By letting others know my message through pageants, I was able to receive over $80,000 in scholarship money and graduate from law school debt free!” Marshawn said.

Marshawn believes that by utilizing her platform as Miss D.C., she was able to show others that feeling great about themselves can really boost an attitude and outlook on life.

“All the confidence I gained with the contest and seeing my platform touch people’s lives reflected in my attitude,” Marshawn said. “I had a new outlook on my approach to school, business and life.”

Continuing with her motto, “When you feel good about yourself, you are more confident,” Marshawn recently designed an upscale women’s casual couture clothing line.

“Being professional in appearance is very important to me and many of my clients at Communication Counts!” Marshawn said. “The line should be available within the end of this year.”

After moving to Washington, Marshawn was presented with the opportunity to be on “The Apprentice.”

“I knew right away that I wanted to be on the show. I felt like the show was designed for someone with my background and personality,” Marshawn said. “I think working with Trump would be extremely educational.”

“I had to stand in line for hours for the open casting call in mid-February!” she said.

Marshawn said the actual interview took place in groups of 10 and lasted about 15 minutes.

“The second stage was when I sent in my video outlining important qualities I embodied,” Marhsawn said. “My tape had footage about my companies, time in the courtroom from Georgetown and even excerpts from my twirling.”

The final stage, Marshawn said, was the weeklong interview in Los Angeles.

“I took IQ tests and personality exams and was even interviewed by Donald Trump,” she said.

Friends and family members say they are excited for Marshawn and her performance on “The Apprentice.” In a recent episode, Marshawn was the winning project manager for the Lamborghini project and received immunity from the boardroom for the following week.

Jason Illian, one of Marshawn’s close friends and a 1999 TCU graduate, said she is truly an amazing woman.

“We met through Fellowship of Christian Athletes,” Illian said. “She is a great girl; very driven but she also has a sense of humor.”

The two friends both have had roles in the reality television world: Illian with “The Bachelorette,” and Marshawn with “The Apprentice.”

“When I was finishing ‘The Bachelor,’ Marshawn was just beginning with ‘The Apprentice,’ Illian said. “I can remember her asking a lot of questions about reality TV and what it was like and it kind of threw me off. When she finally told me she was going to be on ‘The Apprentice’ it all came together.

“I think she is truly talented and has a good chance of winning. The only thing I can see being a problem with Marshawn is that since she is so talented, the other cast members will want to vote her off because she is such a threat.”

In the end, Illian predicts, Marshawn will remain true to herself, something she has always done, and be truly professional with whatever outcome.

“I think Marshawn will continue to influence not just individuals, but America, now that she has the chance with ‘The Apprentice,'” Illian said.

With preparation and coaching from institutions across the country, Marshawn said she believes she is prepared to conquer any task at hand.

Upon graduating from Georgetown Law School, she was offered a job at a top law firm in Atlanta.

“I have a winning attitude,” Marshawn said. “I think it comes from my love for the courtroom.

“Winning is always relative, but I maintain the mindset that I was born to win,” she said. “No one is born to lose.”

Marshawn is a woman who is always “visually” thinking ahead, as she calls it. She knows that everything she does is a step in her ongoing journey to help others.

“I came to TCU as a student wanting to change the world and learned exactly that, and after graduation, I was prepared to face anything,” Marshawn said.

Marshawn believes the most influential lesson she learned at TCU was to think and live outside the box.

“Because you can’t walk on water if you refuse to get out of the boat,” Marshawn said.