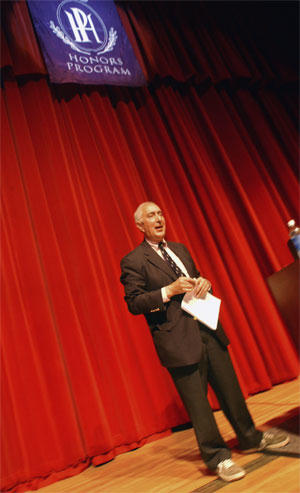 The Honors Program and Fogelson Honors Forum on Wednesday night featured a well-known lawyer, economist, presidential speechwriter, newspaper columnist, actor and talk show host named … anyone? … anyone? … Ben Stein.Stein made his grand entrance into a question and answer session with TCU honors students before the speech in a suit, pink shirt and gray sneakers. No introduction was necessary for a man as well-known and down-to-earth as he.

Stein grabbed his Diet Coke and began by saying how happy he was to be among the people of middle America.

“People in Texas have a sensible, sane quality about them,” he said.

He spoke about his love for President Bush, his stance on the war in Iraq as a foreign policy disaster, and how he thinks the wealthy should pay more taxes to contribute to the salaries of those fighting in Iraq.

He described experiences such as standing in front of former President Nixon during his resignation, “crying and chewing gum at the same time.”

Stein began his speech for the TCU students and community with a montage of jokes, sending the crowd rolling in laughter.

He said that he has worked with many people who are stars in the eyes of the public.

“But the real stars are wearing full-body armor in 100-degree weather, without stunt men to step in when bullets and shrapnel are flying around their heads,” he said.

Stein commended those brave men and women serving America, “the light of the world,” including those involved in the war effort, police officers, teachers and parents. He said they are among a nation of stars – many more than exist in Hollywood.

Stein gave some advice to college students pulling from the various roles he has taken on in his lifetime.

Stein, a husband and father, said: “If you’re planning on getting married, find your mate in college or graduate school because the pickings are slim afterwards.”

Stein, a Yale Law School valedictorian, said: “Stay in school as long as you can.”

Stein, an economist, said: “Save your money now, because every dollar saved now will be worth $10 when you’re 50.”

Stein, a former fraternity brother, said: “Give up drinking the day you graduate, and not a minute before.”

This advice was received well by the students.

Will Thomas, a junior political science major, said, “He had a wealth of knowledge on many aspects – economy, politics and pop culture.”

Therese Muelleman, a junior nursing major, said she respected the scope of accomplishments Stein has achieved.

“I love meeting someone who has taken chances in life and has not stayed in one spot for decades,” she said. “I admire him for following his passions and not just others’ expectations.