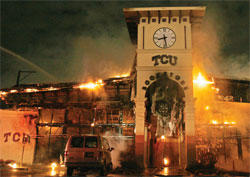 Arson investigators have determined a cutting torch caused the Wednesday three-alarm fire that gutted the inside of the former TCU Bookstore and caused the roof to collapse, a Fort Worth Fire Deparment official said.Roofing materials were super-heated by the torch, used by renovation workers to remove part of the building’s roof supports, said Lt. Kent Worley, public information officer for the Fort Worth Fire Department. He said the layers of roof materials smoldered for hours and caught fire on the east side of the building.

Worley said a Fort Worth police officer noticed smoke and alerted the Fire Department at 1:50 a.m. Within five minutes, engine 21 arrived at the bookstore. At 2:10 a.m., the fire was classified as a two-alarm blaze, escalating to a three-alarm fire at 2:13 a.m., he said.

Worley said firefighters started working inside the building, but they were evacuated once the roof started to collapse.

“They knew that the building was going to be lost, so they pulled out,” he said. “We had heavy fire on (the west side), so we started doing a lot of our efforts to protect the buildings that were immediately to the west.”

About 100 bystanders, another 60 firefighters and several police officers were at the scene. The Fire Department sent 15 trucks and support vehicles.

Bar patrons Josue Lopez and Katy Daume had just spent their night at The University Pub when they heard the bookstore was on fire.

“(The owner of The Pub) was very cautious and told us to get our cars out of the area,” said Lopez, a senior entrepreneurial management and Spanish major.

“All the cops said, ‘The power lines are on fire – get out of here now,'” Daume said. “Two seconds later, the power lines exploded, and all the glass exploded.”

Firefighters sprayed water on buildings such as the former Frog Theater in order to prevent the fire from jumping, he said.

Although there is extensive damage to the 56-year-old, 17,000-square-foot building, Fire Department Captain Jim Sowder said it could still be salvaged.

“It’s really hard to say right now until a structural engineer looks at it,” Sowder said. “But with the renovation process that was going on and with the wall supports that were already in place and with the work that had been done, it looks like the structural integrity, for the most part, is in good shape.”

Representatives from Barnes & Noble, which operates the store, and TCU officials were in meetings throughout Wednesday morning, said Pam Hughes, administrative assistant to Vice Chancellor for Student Affairs Don Mills.

Before Wednesday’s meetings, Chancellor Victor Boschini said via e-mail, “My best hunch is that we will rebuild on that site and make it even better, now that we will probably have to start over.”

Although not successful, attempts have been made to contact other school officials regarding changes in the timeline and cost of renovating the bookstore.

The Fire Department said the damage to the building is estimated at $1 million.

– John-Laurent Tronche contributed to this report.