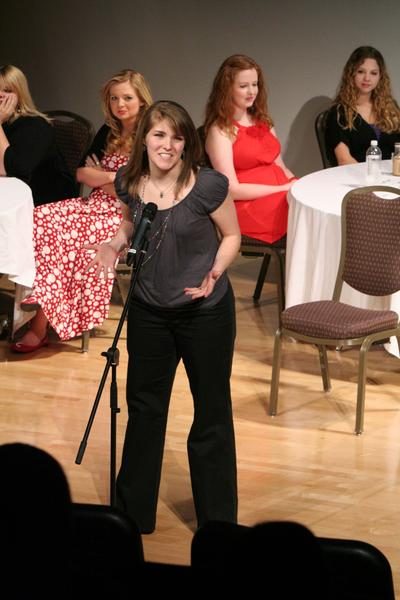 Performances of the play “The Vagina Monologues” concluded the TCU V-Day Campaign to stop violence against women and girls, with a frank and emotional experience for viewers.

Eve Ensler’s “The Vagina Monologues” featured a cast of women telling their own stories through a series of monologues. Each monologue was based on real interviews done by Ensler with a diverse group of women who shared their experiences of violence, abuse and sexuality.

Katie Caruso, a senior theater major and coordinator of the TCU V-Day Campaign, said the play invoked many different emotions.

“[“The Vagina Monologues’ are] wonderfully entertaining, heartwrenching, hilarious, all of these things combined,” she said. “It is very strong and forceful, and it has an opinion and it’s not afraid of it.”

Ashley Ototo, a sophomore psychology and pre-med major, said she liked how the play demonstrated the self-confidence of women in sharing their experiences.

“It’s a wonderful thing that [TCU hosts] “The Vagina Monologues’ on campus because it’s just amazing to see empowerment of women, expressing themselves,” Ototo said.

V-Day campaigns occur each year in February, March and April at colleges and communities all over the world, according to vday.org. Each campaign has the same mission to stop violence against women and girls.

According to the V-Day website, “The Vagina Monologues” encouraged women to open up about their own experiences of survival. This moved Ensler to begin the global movement to end violence against women and girls, using the play as a mechanism to inspire people to act.

The cast included 17 women from varying majors. Samantha Clayborn, a senior theater major, has played the same character three times. Clayborn said she has found some way to be involved with the V-Day campaign since her freshman year. She said her participation in the campaign means being a part of something that helps women all over the world.

“Every woman should see, do, or be a part of [“The Vagina Monologues’] in their life as many times as possible,” she said.

Freshman Alex Marshall, a musical theater major, portrayed a Bosnian woman who was tortured and raped by men during the Yugoslav War.

Proceeds from the monologues’ ticket sales and all other events throughout the week benefited The Women’s Center of Tarrant County and the women and girls of Haiti, Caruso said.