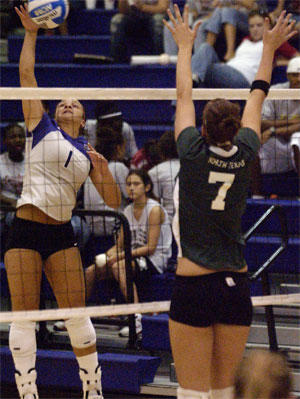 The screams of more than 300 fans filled the University Recreation Center’s Special Events Gym on Tuesday night as the TCU volleyball team defeated local rival North Texas in three games.Sophomore outside hitter Talaya Whitfield led the charge for the Horned Frogs with 16 kills and junior middle blocker Anna Vaughn added four blocks to lead the team a 30-25 win in each game.

Head coach Prentice Lewis said she thought her team did well for having such a short time to prepare after a weekend tournament.

“We only had one day of practice, realistically,” Lewis said. “Our hitters were very solid tonight.”

Several long, tension-filled rallies brought fans to their feet and tested the endurance of both teams.

Vaughn said she thought her team members kept each other energized throughout the match.

“UNT has been kind of a rival these past couple of years,” Vaughn said. “We had a couple of long rallies. (The team had) to keep together and pump each other up.”

Despite the victory, Lewis said the Frogs still have improvements to make.

“There’s still a lot of things we’ve got to work on – mainly passing,” Lewis said. “We are not a passing team at all. I’d like to see that improve a lot more.”

The win brought the Frogs to 10-4 heading into conference play, which starts Friday against Brigham Young in Provo, Utah.

Whitfield said she thinks the team has done well this year because each player has the desire to succeed.

“We’ve come together more as a team,” Whitfield said. “I think it’s just that we want it.