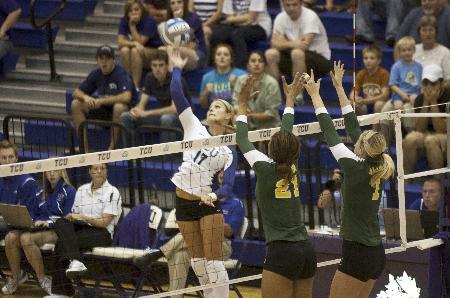 For the second time this season, the volleyball team used an out-of-state tournament to regroup from a tough loss.

The Horned Frogs, who won nearly two weeks ago at the UConn Toyota Classic after losing to Baylor, took home another championship – this time the Akron Invitational.

Prior to the tournament, TCU lost a five-set heartbreaker at SMU; however, the Frogs bounced back with three wins against Saint Francis (Pa.), West Virginia, and Akron.

“Overall it was a great weekend for us, especially coming off the loss to SMU” head coach Prentice Lewis said. “It was great to see them come back after that. It was just a mental loss more than a physical loss. We started to do a lot of things we had done beforehand, and that was great to see.”

In the first set, SFU cut the lead to five, 15-10, but senior Kourtney Edwards slammed two more kills to keep TCU ahead, sophomore Kylie Pont won the Frogs game one at 25-21.

Game two favored SFU, who leaped to a 10-5 advantage after sophomore Megan Munce’s attack error. TCU cut the lead to two, 12-14, but two attack errors and an SFU kill helped jumpstart a 9-2 Red Flash run that put the Frogs away.

After intermission, TCU came out on a mission. Sophomore Kristen Hester’s kill brought the Frogs to match point, and another kill by junior Christy Hudson handed TCU game two, 25-15.

Senior Katelyn Blackwood’s 10 digs and Hudson’s nine kills led the Frogs, who as a team hit a .359 attack percentage and tallied 35 kills.

In game one, a fiery Mountaineer attack put the Frogs back in a hole at 19-13, forcing Lewis to call a timeout.

“We weren’t necessarily doing anything wrong,” Lewis said. “It’s just that we weren’t scoring points. When your team doesn’t pass well, it is hard to score points. We weren’t putting the ball in the floor. That’s what the timeout was for, and they understood and changed.”

TCU, claiming 11 of the next 13 points, rallied back to claim a 24-21 lead. WVU scored the next two points, but a service error gave the Frogs game one.

Hudson’s kill and a Hester/Hudson block were the two points the Frogs needed for a 25-18 win.

Leading 13-6 in game three, the Frogs used a 10-0 burst and never looked back. An Edwards kill brought TCU to match point, and WVU’s eighth service error of the match happened to hand the Frogs a victory.

“When Kourtney plays well, it helps our team tremendously,” Lewis said. “She’s one of those types of athletes who is hitting the ball above everybody and can get a lot of kills. She’s a fantastic athlete.”

Neither team could pull ahead in the first set, but Edwards gave TCU its first set point at 24-23. Akron scored the next two points to claim its own set point, but a service error kept the Frogs alive. With the game knotted at 27, kills by junior Irene Hester and Hudson won TCU set one.

A service error placed TCU one point from a championship victory, but Akron held off three match points. But finally Edwards saved the day and pounded in a kill to win TCU the match.

“It was a tough match in that it was point-for-point,” Lewis said. “We played steady, and that was something we hadn’t done in a few matches. We played three consistent sets which has been difficult for us to do.”

Both Munce and Blackwood were named to the All-Tournament Team. With the three victories, TCU improved to 8-3 on the season.

“It’s another notch,” Lewis said. “I know our athletes are excited. We are really looking forward to conference play.”

The Frogs will begin its quest for a MWC title on Wednesday as they travel to Albuquerque to take on the Lobos of New Mexico at 8 p.m.