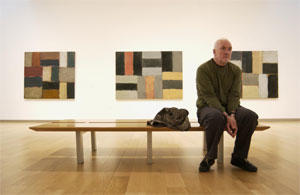 “Wall of Light,” the latest exhibit from artist Sean Scully, mixes color and emotion deftly onto one palette. “The paintings are a competition between the familiar and the subjective,” Scully said at a sneak preview of the exhibit.

Rather than paint a direct landscape, Scully chose to capture the feeling of the landscape by using colors to convey emotion.

“It makes the paintings very difficult at entry,” Scully said, “but hopefully rewarding in the long-term.”

In “Wall of Light Desert Night,” (1999) Scully cleansed his frustration with the glitzy lights of Las Vegas by driving into the desert, where he was inspired to capture the desert sunset.

Many of the paintings were influenced by Scully’s travels to the Mayan ruins, Barcelona, Spain and Mexico, Stephen Phillips, exhibit curator said.

The closely slotted blues and black of the work are meant to signify the “intellectual rigors of the city,” Phillips said.

Born in Dublin and raised in London, Scully shyly stalked through the exhibit, adding anecdotes about his personal favorite paintings.

A undertone of melancholy accentuates many of Scully’s works, which often use muted grays, blues and browns.

While distinctly original, the paintings often invoke the names of Matisse, Paul Gaugin and Jackson Pollock.

“Unlike many artists who want to cut away from tradition, Sean studies and respects art history,” Phillips said.

Scully stressed the open nature of the exhibit.

“The works range from chamber music to the orchestral,” Scully said. “Each painting has possibility for interpretation.”

In art, Scully said he is only interested in the profound.

The exhibit will open at the Modern Art Museum on Feb. 12.