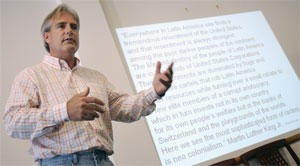 Students who want to create change on a college campus should first find their calling by discovering what breaks their own hearts and what makes them angry, a visiting minister told students during a weekend workshop.The Rev. Larry Sweeney, of the Disciples Justice Advocacy Network,, traveled from San Jose, Calif., to speak to TCU students about biblical justice, current issues and steps toward creating change on campus.

The national network is a group within the Christian Church (Disciples of Christ) that works together for justice and peace within the church, the nation and the world.

The “Creating Change” workshop was intended to inform students about how to create social change and justice through political and religious agencies, said the Rev. Angela Kaufman, minister to the university.

Students from Amnesty International, Frogs for Fair Trade, the Gay/Straight Alliance, the Living Wage Movement and Peace Action attended the workshop, along with a few students who are not members but still passionately connected to the issues, Kaufman said.

Kaufman said she expected about 10 students to attend the workshop, but seven showed.

She also said the small size was intentional so they could participate in a roundtable-style discussion.

Sweeney said one topic they discussed was the “biblical foundation of doing justice.” They discussed how one’s righteousness is determined by how one treats the poor.

Rory Phillips, president of Frogs for Fair Trade, said he enjoyed this part of the discussion.

“There’s a strong correlation between economic justice and biblical righteousness, especially when you start looking at the heavy emphasis on property rights and the fair disbursement of wealth that make up the core of Old Testament regulations,” Phillips, a junior religion major, said.

The workshop also included an exercise to help the students visualize their perfect society. Students discussed such issues as the welfare system and the living wage movement in the United States.

Kennedy Shuler, a senior psychology major, said she benefited most from Sweeney’s graphs representing tax decreases for the wealthy.

“No matter how much you hear about it, it’s always really shocking,” Shuler said. “It keeps reminding you that people live through this every day.”

Sweeney first spoke on current social justice issues, then he offered ideas about how the students could create change on the college campus.

“Even if people won’t go out and picket or protest with you, getting them to watch you, on the sidelines, is a step,” Sweeney said.

Sweeney has worked with numerous groups interested in social justice and change, and he said he was impressed with the advocacy groups at TCU.

“I was very encouraged by their spirit and their passion,” Sweeney said. “In a culture where the favorite activities of youth in college are drinking or shopping, these kids are being politically active and showing a willingness to change themselves and society.”

It was the first of many programs planned this year for students and organizations committed to social change and justice, Kaufman said.

Phillips said getting the TCU Justice and Advocacy Network together in one room was a big step.

“We got all these like-minded people together,” Phillips said. “Now we need to emphasize our strategy and put our ideas together to have a much stronger voice.”