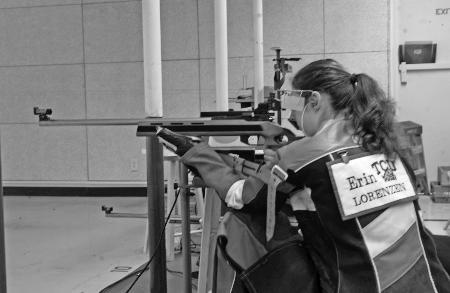 Going into this season, the women’s rifle team faced high expectations. Returning six-letter winners from a group that tied for No. 5 in the nation with the University of Nebraska a year ago, the team has its sights set on loftier goals.

After inconsistent showings earlier in the season, the team has captured three consecutive wins, including its first-ever victory against Nebraska, 4641-4627. The team aggregate scores for each squad were the highest of the year.

“I think starting out this year there was more expectation,” head coach Karen Monez said. “I think that kind of affected their mental approach to the game. But as the season has gone on, they’ve gained some confidence. They’ve come to realize that they are capable of shooting the scores they can win the NCAA (championship) with.”

Sophomore Lauren Sullivan, who shot 574 in smallbore and 584 in air rifle against Nebraska, said the win over the Cornhuskers may be indicative of where the team is heading.

“I definitely think it was a turning point for the year,” Sullivan said. “We had all struggled for a semester and were starting to worry about the NCAA’s and everything. After break, we all came back fresh and ready to go.”

In November and December, the team dropped matches against Jacksonville State, Alaska-Fairbanks and Army.

As the NCAA qualifying matches draw near, sophomore Emily Paper said the team knows that it needs to turn in quality scores. Paper tallied an overall score of 1164 against Nebraska.

“We’re definitely trying to peak when it’s important and try to shoot more quality scores,” Paper said. “But also this year, because we did so well last year, we’re shooting against all the top schools in the nation.”

While the team has enjoyed recent success and holds the long-term goal of placing in the top three at the NCAA championship, Sullivan said the focus should be on the present.

“I think you can break it down to a shot-by-shot basis,” Sullivan said. “You have to refocus for every shot. Otherwise it will all go down hill from there.”

Every shooter on the team has the responsibility of preparing for a match, but Monez has helped build the team’s mental approach.

In addition to the improved shooting of Paper and Sullivan, sophomore Erin Lorenzen and junior Tanya Gorin have continued to pace the team. Lorenzen held the team’s highest air rifle average as a freshman in 2006-2007.

She finished sixth overall against Nebraska, with an aggregate score of 1153. Gorin scored 545 in smallbore and 563 in air rifle, respectively.

The next match for the rifle team is Feb. 2 against Air Force at home.