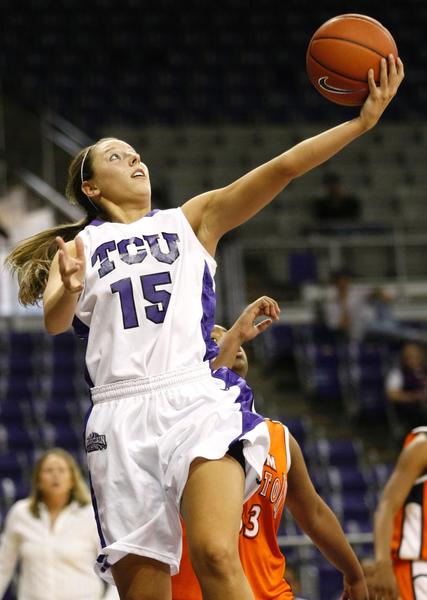 Holding the No. 23 ranking in the Associated Press preseason poll, the Horned Frogs women’s basketball team has never been ranked higher before the season started.

“You can have seniors that maybe haven’t been on the floor but ours have and they’ve all started in their career,” the twelfth-year head coach said. “I think their experience of having been there and been through the process, hopefully helping some of these younger players.”

Last season, senior guard Emily Carter led the team in scoring (14.4 ppg), and sophomore forward Starr Crawford averaged close to a double-double (9.8 ppg and 8.8 rpg), but the key player is senior guard/forward Helena Sverrisdottir. Coming off a season in which she averaged 13.6 points and 6.7 rebounds per game, Sverrisdottir was named as one of 30 players on the Wooden Award watch list, given to the nation’s best player.

Along with their four seniors, the Horned Frogs also have five freshmen. Mittie said forward Aron Garcia and guard/forward Briesha Wynn have been the most impressive of the Lady Frogs’ newcomers.

“They’ve been the ones that I would say have the early lead on getting some playing time, but that consistency is a big thing,” he said. “You’ve got to bring it every day at this level and it won’t get any easier.”

Mittie said he envisioned his team creating mismatches throughout the season because it could start a lineup that included any combination of nine different players who are six-feet tall or taller.

“In our offense we have the flexibility and versatility to put players in different spots. All the pieces are pretty interchangeable,” he said.

One thing the Frogs hope to accomplish this season is to surpass the first round of the NCAA Tournament, something they have not done since 2006. TCU will play five teams ranked in the Top 25 during non-conference play. Sverrisdottir said those tough games would help prepare the team to make a postseason run.

“It’s definitely going to push us to be able to come out every night and play good and play together so that it will help us and prepare us,” she said.

The first round tournament exit in March was the Frogs ninth trip to March Madness under Mittie and the Frogs have never earned a berth in the Sweet Sixteen.

Regardless of that, Mittie said the team has high expectations.

“We want to get to the Final Four. We want to push it even farther than we have in the past,” Mittie said. “I don’t want to sell this team short. This is a team that’s capable of being a good basketball team.”