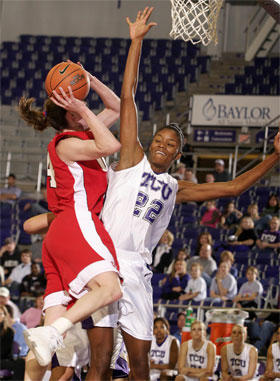 Life does not often grant second chances. The Lady Frogs, however, have exactly that.TCU will look to avenge its Jan. 7 road loss to Wyoming tonight in a game that marks the halfway point of in-conference scheduling.

Head coach Jeff Mittie said that although the Frogs have learned things from their earlier defeat, every game is unique.

“Every game presents a different set of challenges,” Mittie said.

“We just have to do a lot of little things right,” Ross said. “They fought hard, and I don’t want to take that away from them … We have to get a couple more offensive boards to make a difference.”

Wyoming did not showcase just one player in the early January match up; TCU allowed two double-digit scorers, and senior guard Erin Hicks finished the night with 8 points, 6 assists and 7 rebounds.

Despite her stat line, Mittie said TCU will continue to defend Hicks with what he considers a solid game plan.

“She’s a very good player,” Mittie said. “I think we did a good job of pressuring her (last time); you just hope that’s a player that doesn’t have 14 points and 8 assists.”

Now that the Lady Frogs have reached the season’s halfway mark, Mittie jokingly said he was surprised with the team’s play.

“I always figured we’d be 8-0 in the league; never figure on losing a game,” Mittie said with a smile.

Although playing in the Mountain West Conference involves a substantial amount of travel for a Texas-based team, Ross said, the squad does not even think about fatigue.

And another shot at the Cowgirls, of course.

“That’s the advantage of playing in the MWC,” Ross said. “Play everyone twice.