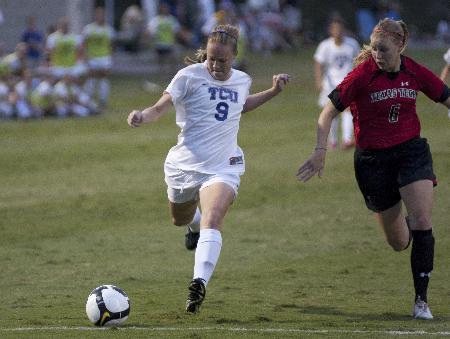 The Texas Tech Red Raiders beat the TCU women’s soccer team 4-3 in an intense double overtime after a 3-3 tie at the half.

Brittney Harrison, the only player listed as the Red Raiders’ forward on the roster, shut down TCU’s last attempts to close out the match with a win, and she did it with 30 seconds left on the clock.

“We knew every time we play them it’s always an offensive battle where both teams just go at it, and that’s what you saw tonight,” Abdalla said.

In the first half the Red Raiders managed the offensive side of the field against TCU, pouring pressure and fast-paced play onto TCU’s defensive lineup.

With two goals early in the first half, Texas Tech seemed to be dominating the field.

Harrison, at about 12 minutes into the game, snuck past the Horned Frogs’ defense off of an assist from midfielder Taylor Lytle and shot the ball into the lower left hand corner of the goal.

Less than 10 minutes later, Lytle scored into the high right side off of an assist by midfielder Conner Williams.

After this play Dan Abdalla, head coach of the TCU team, was sucking aggressively at a lollipop while writing on a small paper.

About 16 minutes before the half, TCU was applying more pressure on Texas Tech’s defense, but the Red Raiders came right back with a strong front, approaching goalkeeper Kelsey Walters’ territory consistently with player number four, Brittney Harrison.

“TCU’s goalie is really good, she came out of the box a lot of times and I just wasn’t able to beat her, but the last goal counted, and that’s the one that ended the game, so I’m just excited that it happened.

By halftime, Walters had three saves and numerous playbacks from the defense, proof that the Texas Tech offense was putting her skills to the test. The Red Raiders’ pressure was constant, however, TCU did not back down from the half without a fight.

Jenna Hayes, a sophomore, came off the bench for a substitution and two minutes later blasted the ball past the Red Raider’s keeper Erin Wikelius with assists from junior Chelsea Cody and sophomore Jordan Calhoun.

“I haven’t scored in a while, so it was awesome,” Hayes said. “It kinda got us going for the rest of the half.

The fast goal was followed by a raise in the intensity of the physical aspect of the game, as more players dropped to the ground and more fouls were called on both teams.

The men’s swim team paid the women’s soccer team a visit, and stood opposite of the bleachers shirtless, with letters across the chests and backs, which spelled “!GO FROGS!” when they stood in order. The shirtless swimmers drew attention from the crowd and served as unofficial cheerleaders for the game. At the start of the second half the swim team was chanting as the soccer team came into the game hard and fast.

Walters was still busy in the back, clearing one ball straight into the center of the bleachers, stemming a “Heads up!” and excited chatter from the crowd.

Senior Lizzy Karoly showed her grit when she sent a scathing shot low and into the corner, assisted by Calhoun in the 72nd minute, just before Wikelius could get to it. With the score at 3-2, the one-point difference increased the excitement of the game.

The intensity arched higher and higher as the gap between the teams decreased, and Katie Taylor brought this intensity to a new level when 12 minutes before the end of the second half, she scored her first goal of the year off of a corner kick from Mechalske.

The crowd reacted in uproar when a game official dismissed a potential goal from number five Katie Taylor in an off sides call with 11 minutes left in the half.

Continued protest from the crowd came again when a foul was called against TCU, creating tension in the stands against the common enemy of officiating. After what seemed like would be another goal for Taylor in a breakaway, the whistle blew and Taylor was given a yellow card by the officiating referee.

After a shot attempt by Calhoun which sent her rolling from a collision with Red Raiders’ goalkeeper Wikelius, Abdalla could be seen with a tight jaw, again, working furiously on a lollipop. With 44 seconds left in the second half, the red team came back with strong possession in TCU’s defensive end.

The first overtime contained more high-speed, high-intensity dueling of the Horned Frogs’ determination and the Red Raiders’ persistence, but brought no conclusive results at the end of the 10 minutes. The score was still 3-3.

The second overtime was anybody’s game. Possession of the ball was on both ends, and neither team seemed ready to call it quits with an even score.

Fans, coaches, and players stood in anticipation for the end of the match.

In the last minute, Red Raider number four, Brittney Harrison, pushed the ball forward in a breakaway past TCU defenders. She shot the ball high over the heads of both of the defenders and goalkeeper Kelsey Walters, and into the back of TCU’s net. With 30 seconds left on the clock, the Red Raider team rushed the field in celebration.

Abdalla said the team’s defense performed better, but that the adjustment took time.

“We gave up two early goals where Tech took advantage of us, giving up a little bit too much space, and so hopefully from our standpoint it’s a good learning experience,” Abdalla said.

The Horned Frogs fired 23 shots compared to the Red Raiders’ 16 by the end of the match, indicating the need for more finishes per shot.

“Opportunities are there, we just can’t get ’em in,” Taylor said after the game. “It’ll come.”