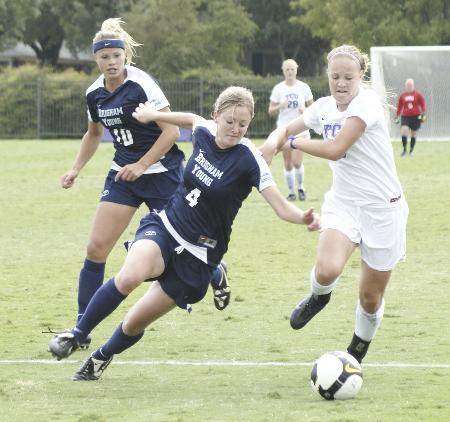 After finishing the fall season with the best record in the program’s history, the women’s soccer team starts its spring offseason Sunday with a home match against Navarro College.

Head coach Dan Abdalla said he was pleased the team was able to see its hard work pay off with its 14-4-2 season, the best in program history, but also sees room for improvement and will use this season as a training opportunity.

“We are going to use all the games as practices,” Abdalla said. “We are just trying to improve, experiment with some things and see which players will work in different spots.”

Sophomore forward Jackie Torda, who was third on the team in goals last season, said although this is the offseason, there will still be plenty of competition on the field, including the game against Navarro on Sunday.

Torda said the team will have to keep its focus throughout the game, especially being the first one of the spring.

The soccer team is not only focused on the field but off the field as well – 16 players were named to the Fall 2008 Academic All-Mountain West Conference team Monday.

Abdalla said this shows how well-rounded and devoted the team is to many different aspects of their lives.

“It’s a reflection of their commitment to being the best that they can in everything that they do,” he said.

Torda said the team has a goal of keeping an average 3.3 GPA and takes pride in the fact that the players can balance both school and soccer.

“Not only are we focusing in the classroom but we can get it done on the soccer field,” said Calhoun, who was among those honored. “Our mindset is both academic and athletic.”

Calhoun was also named Mountain West Conference Freshman of the Year and a second-team Freshman All-American for the 2008 season. Calhoun is the soccer program’s first All-American honoree.