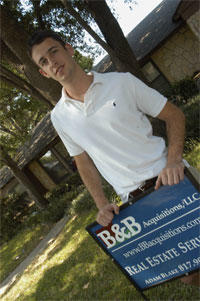 Some students at TCU work, but fewer students actually have people working for them.Justin Avery Anderson and Adam Blake are two business students who already run their own businesses.

Anderson, a freshman entrepreneurial management major, is the CEO and founder of a granola company, Anderson Trail.

Blake, a junior entrepreneurial management and finance major, runs a real estate business, B & B Acquisitions.

Bob Akin, a marketing instructor for the business school, said running a business “enhances schoolwork because it becomes the lab.”

Blake said 75 percent of his time during the day is spent dealing with business, while 25 percent is spent handling schoolwork.

This is Anderson’s first semester at TCU, but he said the way things are going, he will be able to handle school and run his business.

For Anderson, it all started in the summer of 2001 at a bed and breakfast in New Mexico. He was served a soft granola for breakfast and loved it. He said he went home and tried to make something similar to what he tasted.

“It’s thrilling to envision something in your mind and then take the steps to create it,” Anderson said.

After creating his product, Anderson took it on a camping trip and let his friends taste it. He said he also gave the granola to family and friends as gifts.

Anderson said his family kept encouraging him to take his product to a higher level.

“Your family is supposed to be encouraging, but when other people started telling me the same thing, I started researching,” he said.

Anderson researched packaging and the legalities of selling food, bought a barcode, had a nutritionist make a label, and used a designer in Germany to design his packaging and logo. He said the Internet allowed him to obtain most of the information.

Akin said starting a business is much easier with search engines.

“Now you can just Google search everything,” Akin said.

When Anderson first created the moist granola, he said his goal was for it to be sold in Central Market. On April 21, Anderson Trail could be seen on the shelves of a Central Market in Houston, Anderson said. Central Markets in Austin, San Antonio, Dallas and Fort Worth now carry Anderson’s granola for $6.99.

A catering company in Houston, Melange Catering and Special Events, makes the granola and Anderson’s mother packages and distributes the product. He is in the process of finding a co-packer to make and package the granola for him.

“They’ll be producing, and I can focus on marketing,” Anderson said.

Anderson came to TCU after he was one of six winners of the 2005 TCU Texas Youth Entrepreneur of the Year Award.

David Minor, director of the entrepreneurial program, said, “Justin was just what we were looking for when we started this.”

Blake has also been awarded for his success in business.

He won the Global Student Entrepreneur Award for the Sun Belt Region and will travel to Orlando in October to compete against other regional winners.

Blake said he started his real estate business in the spring of his freshman year with monetary help.

“I was lucky to have an outside investor,” Blake said.

When Blake started, his friends rented the first house he owned.

Blake owns $1 million of residential property in Fort Worth.

Blake’s dad co-signed on the first four houses he bought, but now, everything is in Blake’s name.

“I’ve really matured, and some people already think I’m out of college,” he said.

Blake is looking to expand his business and move into commercial real estate soon, he said. He also said he wants to invest in areas and redevelop them.

Akin estimated that 10 percent to 15 percent of business students are already entrepreneurs.